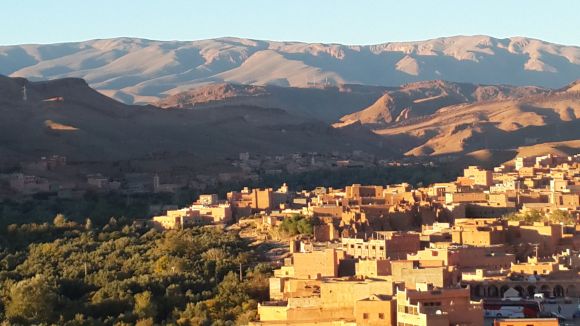 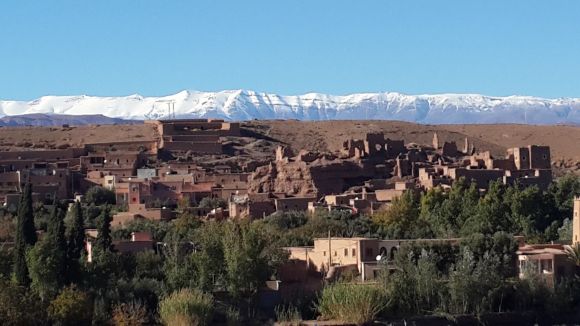 Imagine snow-covered mountain peaks nearly 2000m high.  Deep gorges with rushing rivers.  Barren rocky landscapes descending to deep green valleys.  Long belts of date palm oases scattered with the fabulous mud architecture of kasbahs and fortified ksour villages.  Ancient caravan routes that reached from the ancient royal cities of Marrakesh and Fes and out across the Sahara to Timbuktu, Niger and old Sudan, carrying gold, slaves and salt well into the nineteenth century.  See in your mind’s eye little seaside towns, their white buildings gleaming in the sun like so many children’s building blocks. 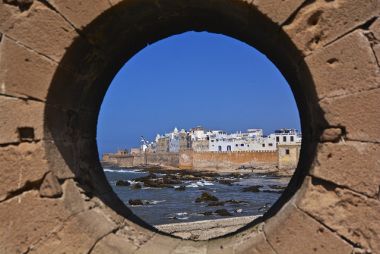 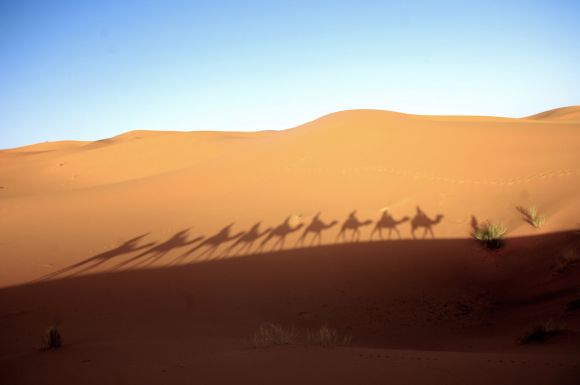 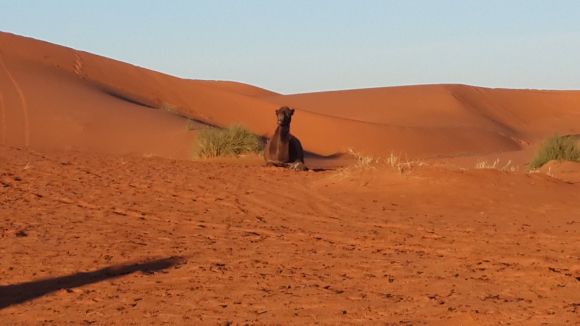 Picture wandering through a thousand-year-old medina – an enclosed warren of houses, shops, schools, mosques, fountains, communal bakeries and public baths, where life has gone on in the same way for over a millennium and where’s there’s only room for a couple of people to walk abreast between the narrow walls. Flowing robes, veiled women and dark piercing eyes.  No vehicles allowed or possible here.  Make way for the heavily laden donkeys and mules that carry all that’s needed on sure-footed little hooves in those rabbit warrens of streets, alleys, blind corners and narrow paths – Balak!  Make Way!  Donkey Alert!  Quickly squeeze yourself flat against the walls. 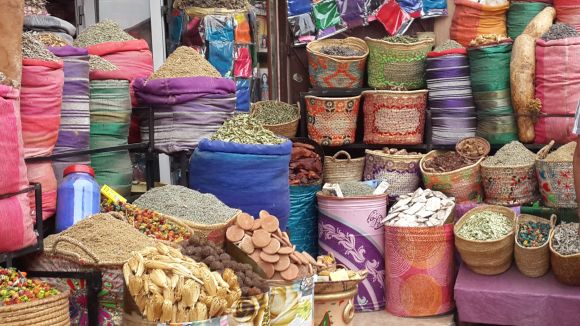 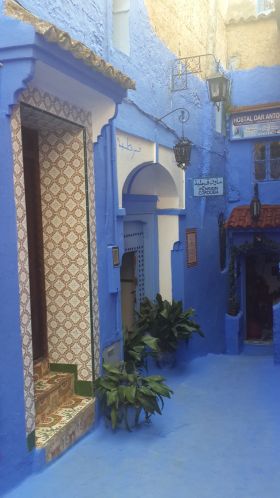 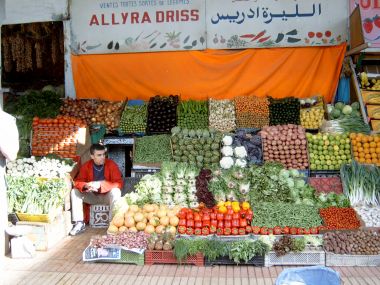 Imagine extremes of temperature too.  One day it’s bright, warm and sunny, the next, up in the high Atlas mountains, it’s nearly freezing.
For such a small country, Morocco offers a staggering array of cultural, geological and natural diversity.  Some highlights stand out.  The Hassan II  Mosque in Casablanca is the thirteenth largest in the world (St Peter’s in Rome can fit comfortably inside) Raised on a rocky platform reclaimed from the ocean, it’s awesome in size and its 200m minaret is the tallest in the world.  The mosque itself holds 25,000 worshippers within and a further 80 000 in the courtyard, and is open to all faiths. 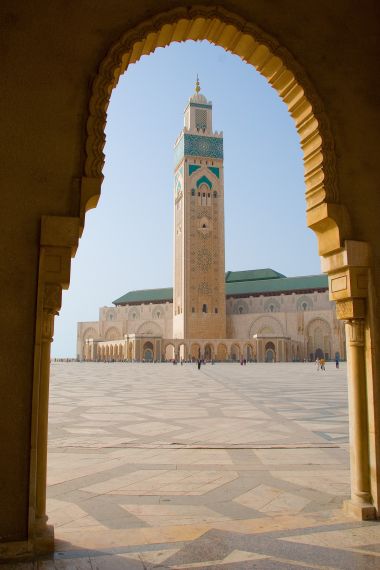 The ancient Roman city of Volubilis in the Middle Atlas is haunting and memorable.  A striking sight, visible from miles around, it stands on a long, high plateau.  Once, the Roman Empire’s most remote and far-flung base, Volubilis was a colonial, provincial capital. 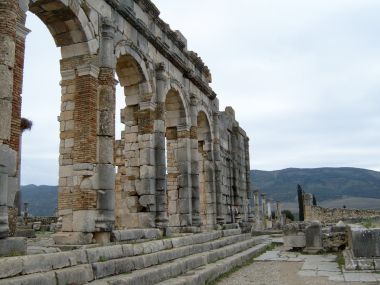 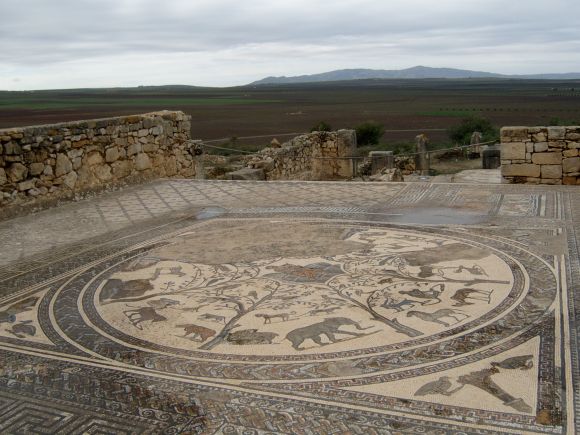 The second-and third-century AD buildings are magnificent in scope and poignantly evoke the life of the busy city this once was.  There are some superb mosaic floors still in fine condition even after the passing of so many centuries.
A favourite destination of locals and foreign tourists alike is the little seaside town of Essaouira on the Atlantic coast. 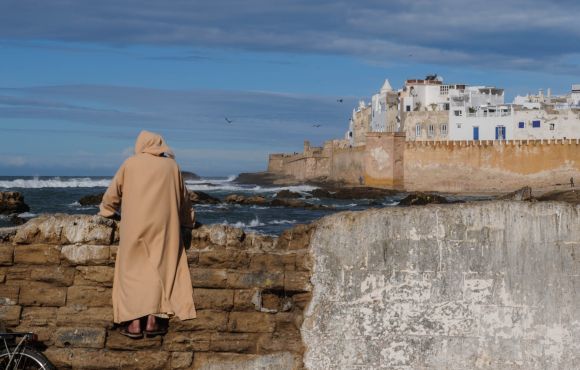 At first sight it has an amazingly European feel that is not surprising when you discover that the port and its 18th-century fortified seafront ramparts were designed by the same French architect who designed the port of Saint-Malo in Brittany, France. You’ll also notice Portuguese and French architecture, but once inside the town’s throbbing heart – the medina with its markets, souks, narrow streets and cobbled alleyways – you’re back in quintessential Morocco with the scent of spices drifting through the air, donkeys braying, tiny shops gleaming with lamps that seem to have come straight from Aladdin’s Cave, and hand-woven brightly coloured rugs and carpets piled up to tempt the passers-by. There’s always a fresh sea breeze (that can become a howling gale in winter) blowing over the town and its red ramparts that carries the smell of fish from the busy fishing harbour. A fish meal at any small restaurant or outdoor kitchen is a must. 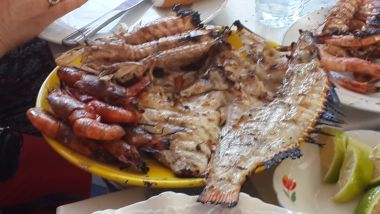 Essaouira is often regarded as Morocco’s craft capital where craftspeople have been producing unique pottery, gold and silver jewellery, ceramic tiles and woodwork for centuries. Watch the woodworkers carving and turning lovely handmade bowls, chess sets, furniture and figurines before choosing the piece that will go home with you.
Also unforgettably etched on the memory are the hundreds of ksour, or kasbahs, essentially fortified tribal villages, massive but transitory
structures, built out of the mud-clay of the riverbanks. 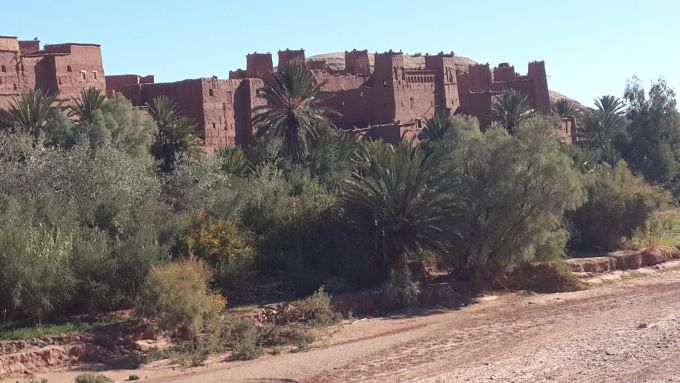 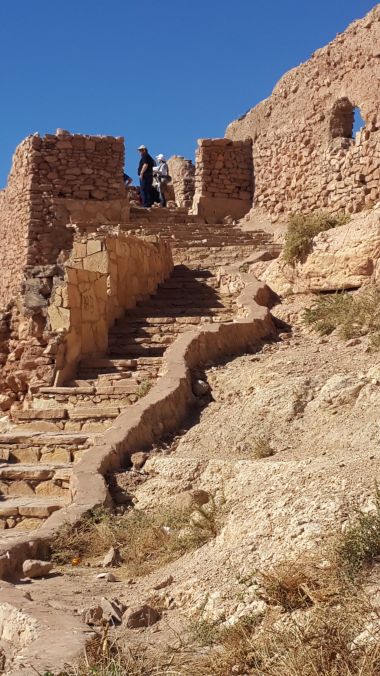 A unique and probably indigenous development of the Berber populations (Morocco’s first people), they are often monumental in design and fabulously decorated. Aït Benhaddou, in Morocco’s great southern part, is one of the most awe-inspiring and wildly beautiful. It’s one of the most spectacular sights of the Atlas, piled higgledy-piggledy upon dark soaring rocks above a shallow, reed-strewn river, a drawcard not only for tourists and travellers but also for movie-makers.  Lawrence of Arabia, Gladiator, Jesus of Nazareth, Game of Thrones were all filmed here and it’s now a UNESCO Cultural World Heritage site.
The Royal City of Fez is another highlight. You’ll smell the dye pits and the tanneries long before you see them, but you’ll quickly be seduced by the colourful array of handmade leatherwork for sale. 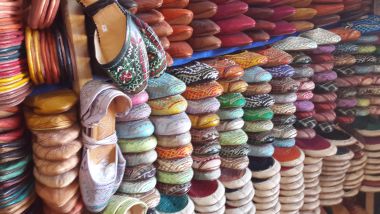 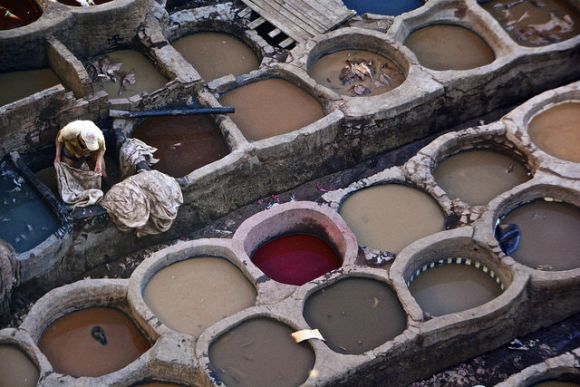 A visit to an ancient medersa – Medersa Bou Inania –  the city’s only building still in religious use that non-Muslims are allowed to enter is well worthwhile. Built in the 1300s, its zellij tilework, fabulously carved dark cedar doors, decorations and stucco are wondrous things to see.  It was from medersas such as this (medersa means “place of study”) where students and their teachers lived and worked, that Arab mathematics first made their way to medieval Europe.

Mountains, beaches, kasbahs, souks, precipitous gorges and lush green valley palmeries – Morocco is all of these and more

Mountains, beaches, kasbahs, souks, precipitous gorges and lush green valley palmeries – Morocco is all of these and more, but no visitor should miss Marrakesh – a city of great beauty, red and tentlike against a backdrop of the magnificent peaks of the snow-covered Atlas mountains.  It’s an Arabian dream, a tourist mecca.

It has some superb architectural attractions – the Royal Palace, the Menara gardens with their still waters and ancient olive groves, the fine carving of the Saadian Tombs and towering above all, the Koutoubia Minaret, the most perfect Islamic monument in North Africa.
But Marrakesh’s throbbing heart is Djemaa El Fna, a huge square in the heart of the city’s souks and markets, where food-sellers, musicians, jugglers, fire-eaters, performing monkeys and snakes, drummers, dancers, an Arab Punch and Judy show, acrobats, story-tellers and fortune-tellers strut their stuff before shifting circles of onlookers and passers-by.  Cruising horse-drawn carriages are waiting to take you around the square and city in stately style. 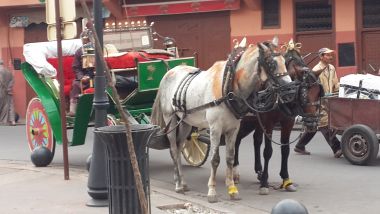 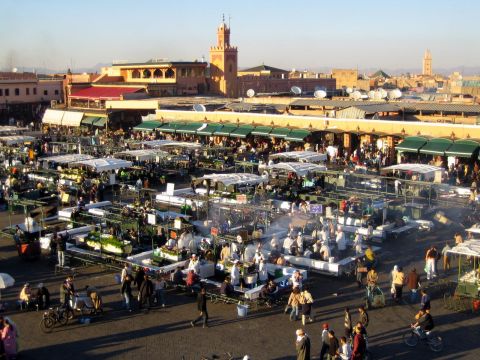 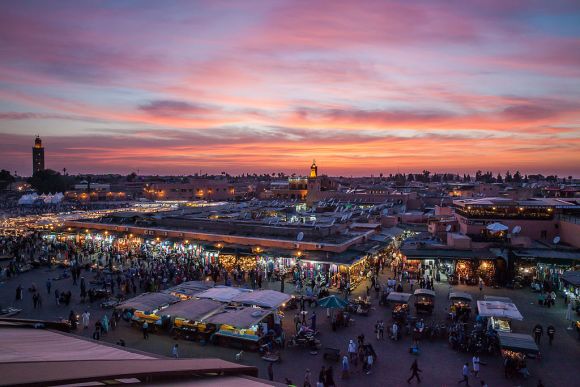 Oh, yes.  And the cats of Morocco.  To be found everywhere.  Apparently, the Prophet Mohammed, is somewhere depicted with a cat in his arms, and so cats have First Class status.  They’re everywhere, sleeping in dark corners, miaowing for food and attention in souks and restaurants, dozing on piles of colourful Berber rugs, foraging for fish heads beside a seaside café, reclining regally on ancient monuments. 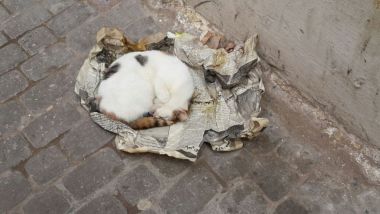 And generalities?  Well, the plumbing doesn’t always work, the food isn’t all it’s cracked up to be, it’s sometimes difficult to get a beer or a glass of wine (almost impossible during Ramadan), the locals aren’t always used to dealing with overseas visitors, but then, in a curious way, these things all add to Morocco’s very laid-back charm.
If you’re adventurous, eager to see and learn, open to a very different but incredibly rich culture, ready to be overpowered by the country’s natural beauty, want to buy some of the most beautiful and affordable handmade jewellery in the world, then make Morocco your destination. 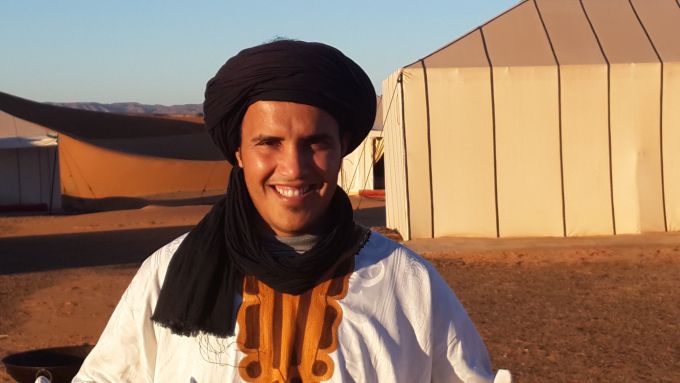