So where do you start? Cusco, with its brown-tiled roofs, terracotta-coloured buildings, strong Spanish look and feel, has a fairytale quality.  In the dark mountains that encircle the town dwell the apukuna, the divine lords of the mountains, whom the local Quechua people still worship along with their Christian god and his saints. 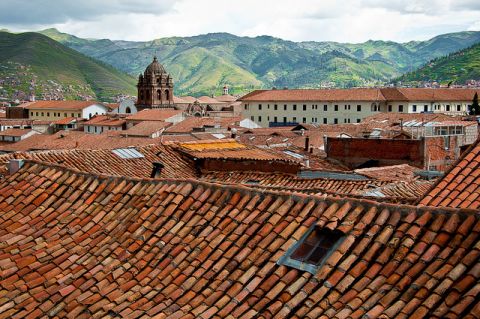 The rooftops of Cusco by Kenneth Moore 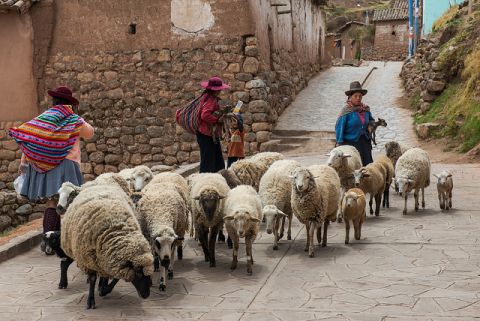 Just outside Cusco is the great Inca fortress of Sacsayhuaman, where the gold-seeking ruthless Spanish conquistadors slaughtered ten thousand Inca warriors and in so doing destroyed one of the greatest empires the world has ever known, stretching from modern Ecuador to southern Chile, from the Amazon jungles in the east to the Pacific Ocean in the west. 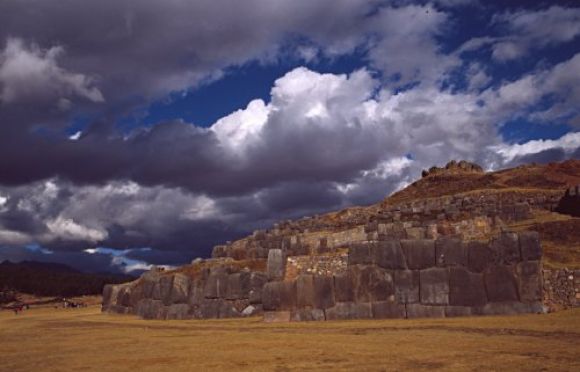 The Inca fortress of Sacsayhuaman by Laurenz Bobke

The fortress is an amazing sight – walls built of giant stones so neatly and precisely fitted together that not even a credit card can slip between them. 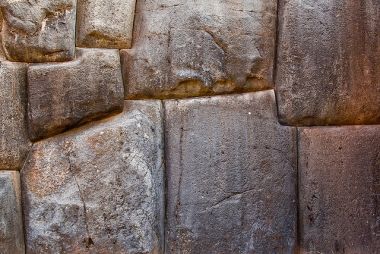 It’s also a centre of energy. If you stand in one of the small stone circles which dot the site, you’re almost guaranteed to feel a quickening of the pulse, an intensification of feeling, a kind of mini-supercharge go through your body. Don’t try to find an explanation. Peru poses many questions and scores of differing answers. Were the stones man-made? How did they get here? Was there a kind of sound technology involved? What about aliens?

More questions await you at Machu Picchu, when after a dramatically scenic train ride from Cusco through the Sacred Valley of the Incas with its majestic peaks, deep valleys and rushing rivers, you arrive at one of the world’s most iconic destinations. 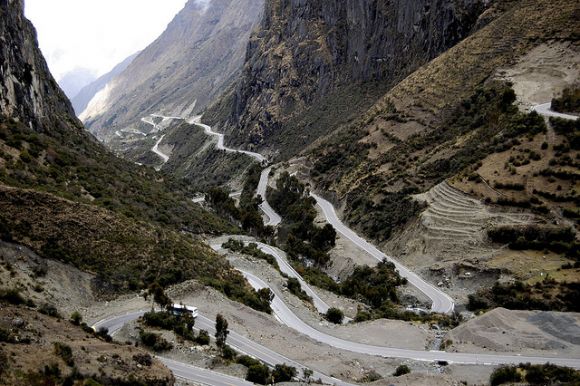 On the way to Machu Picchu by Thiago Jacomasso

There’s something about Peru that prompts even the toughest of sceptics to consider matters spiritual - it goes with the territory.

Who built this ancient city? Why didn’t the conquistadors ever find it? What was it used for? Who lived here? That it was an Inca city there is no doubt. Make up your own mind about the other riddles as you enter through the city’s mighty stone gates and marvel at its sacred altars, the striking stone carving of a condor, the three high windows of the sacred temple, the Intiwatana, the sacred sundial known as the “Hitching Post of the Sun’ (an inappropriate analogy because the Incas had no horses). But whatever answers you come up with, I think you’ll find that you are spiritually moved. There’s something about Peru that prompts even the toughest of sceptics to consider matters spiritual - it goes with the territory. 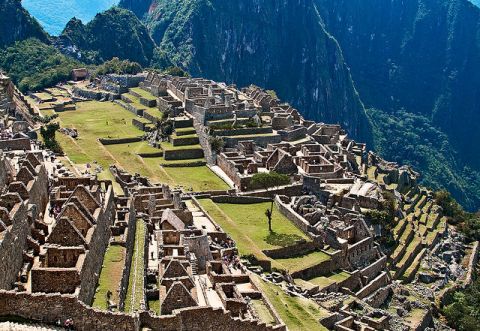 Even more puzzles await you when you visit the mysterious Nazco lines in the Peruvian southern desert – enormous patterns and pictures drawn on the desolate plains which can only be seen in their entirety from the air. 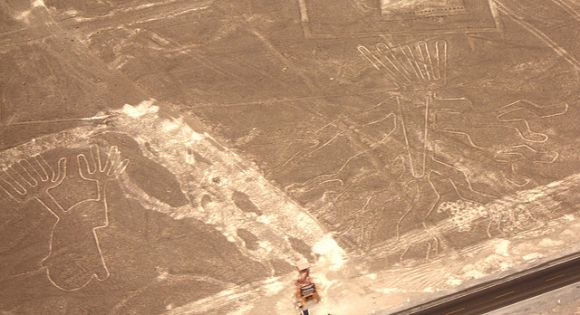 The Nazco lines by James Peacock

Covering nearly 400 square miles of desert, about 300 hundred figures made of straight lines and geometric shapes are etched in the surface of the desert pampa sand  - a hummingbird, animals, even a whale, flowers, plants, a giant candelabra, spirals, gods and humans, sacred geometry. Nobody knows why the lines were made – offerings to the gods, celestial observatories or messages to beings from outer space?

But there’s much more to Peru than the mysteries of Machu Picchu and Nazco. Fly east from Cusco over snow-covered peaks, over the great, green jungles to the tiny town of Puerto Maldonado where Peru borders Columbia and Brazil. 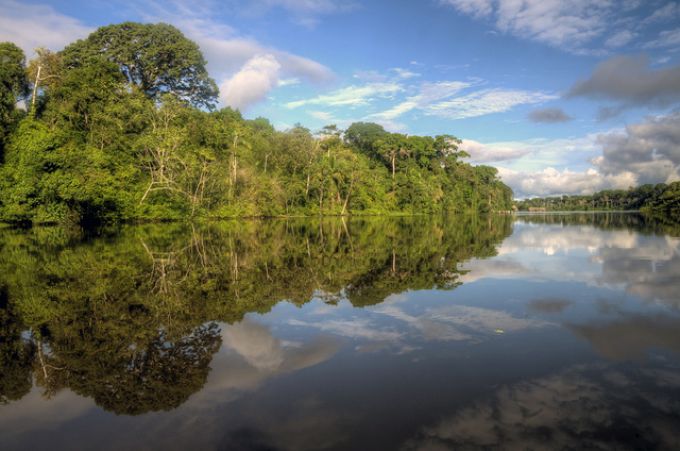 At the tiny airport chomp on caramelised brazil nuts, buy hand-carved wooden toucans, or invest in a stuffed piranha. Take a trip down one of the tributaries of the Amazon in a motorised canoe and stay in a jungle camp, where brightly coloured parrots and green parakeets raucously call and where you’ll eat flaky fish served in bamboo sticks and sweet sugar cakes

Doze in your hammock on your wooden deck as you look out over the slowly moving river, or if you are a spiritual seeker, take part in a traditional shamanic ceremony where the ayahuasca – the medicine of the sacred vine – will transport you into an alternative universe.
If you find yourself in Lima (not one of my favourite cities) which is often covered with a blanket of cloud, check out the cultural centres of  Miraflores and Barranco with great bars, restaurants and fashionable shops, and the Plaza de Armas, where Francisco Pizarro founded the city in 1535. 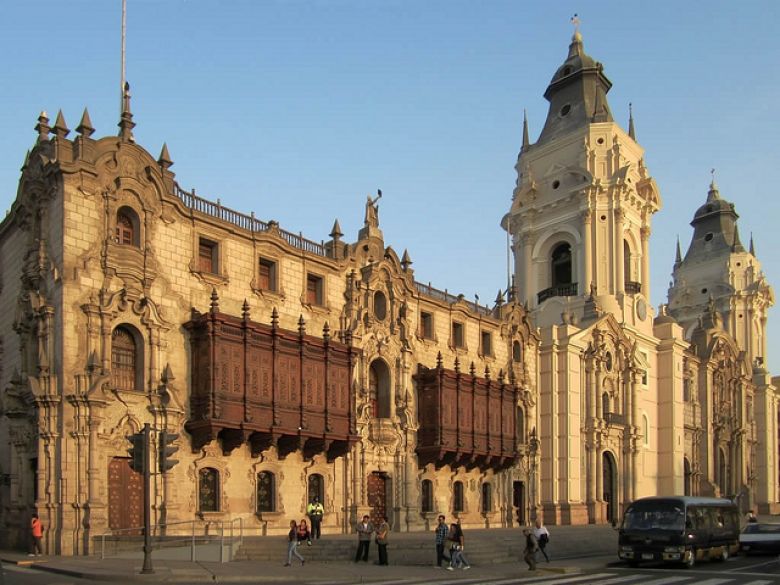 And just a five-minute walk from the Plaza de Armas is the Church and Convent of San Francisco, one of Lima's most spectacular buildings dating from the colonial era.

But it’s not just Peru’s history and beauty that makes it a magical place. It’s an almost palpable feeling of otherness, of a spiritual dimension that hovers just beyond our grasp.
Go see for yourself.